In this post, I want to recall the elements of the regular Riemann-Hilbert Correspondence (but only in dimension 1, on our small disk around the origin). We’ll talk more about the category of Meromorphic Connections on

that satisfy an analytic condition called moderate growth. From there, we can state Deligne’s solution to the regular R-H correspondence, and start to understand more about the failure in the irregular setting. We end with some emergent phenomena that occur only for irregular singularities, which add to the many difficulties in proving the irregular R-H correspondence. Lots of things from this post are from chapter 5 of “D-modules, perverse sheaves, and representation theory“.

be a small open ball around the origin in

the field of fractions of

is a local coordinate on

. Then, recall that a meromorphic connection consists of the data of a free

. A morphism of meromorphic connections is just a map

and commutes with the action of

. This is actually a bit of a simplification of connections–normally we’d specify

produces the original definition I gave.

These objects then form an Abelian category (since we’re really just restricting to a thick subcategory of Holonomic D-modules). Again, the point of all this is just to formalize both our fast-and-loose simplifications from last time, and to phrase the problem functorially. This category of meromorphic connections is just a simplified way of talking about (complex) linear ODE’s with (possible) singularities at

. Now, what does a general meromorphic connection look like?

with our local coordinate

, choosing a system of generators of

(these always exist globally on

is contractible). Then, looking at the action of

on this basis gives us a connection matrix with values in

the negative sign is just a convention, to make the next expression nicer. Thus, if

is a general element of

, then the above expression and the Leibniz rule gives us

Hence, the collection of flat sections of

) correspond to solutions of the system of linear ordinary differential equations

Likewise, any such differential equation gives rise to a connection–let

be the space of solutions to the above differential equation. Then, this equation is a rule for how the symbol

acts on the elements of

, taken as the definition of

has at worst poles of degree one, i.e., if

for some constant matrix

(to compensate for maybe choosing a bad generating set for

, we only care if

is “gauge equivalent” to a matrix of the form

). In the rank one case, this is a differential equation of the form

, and has fundamental solution

. What sort of function is this? When

is a globally defined holomorphic function (it’s just a monomial!), and when

is a globally defined meromorphic function on

that is holomorphic on

, we have to use the definition

is only a well-defined function on the complement of a choice of branch cut. Moreover, while this is a perfectly valid solution on any open simply connected subset of

, as we travel around the origin and analytically continue

, the value of this function jumps due to monodromy. Precisely, if we let 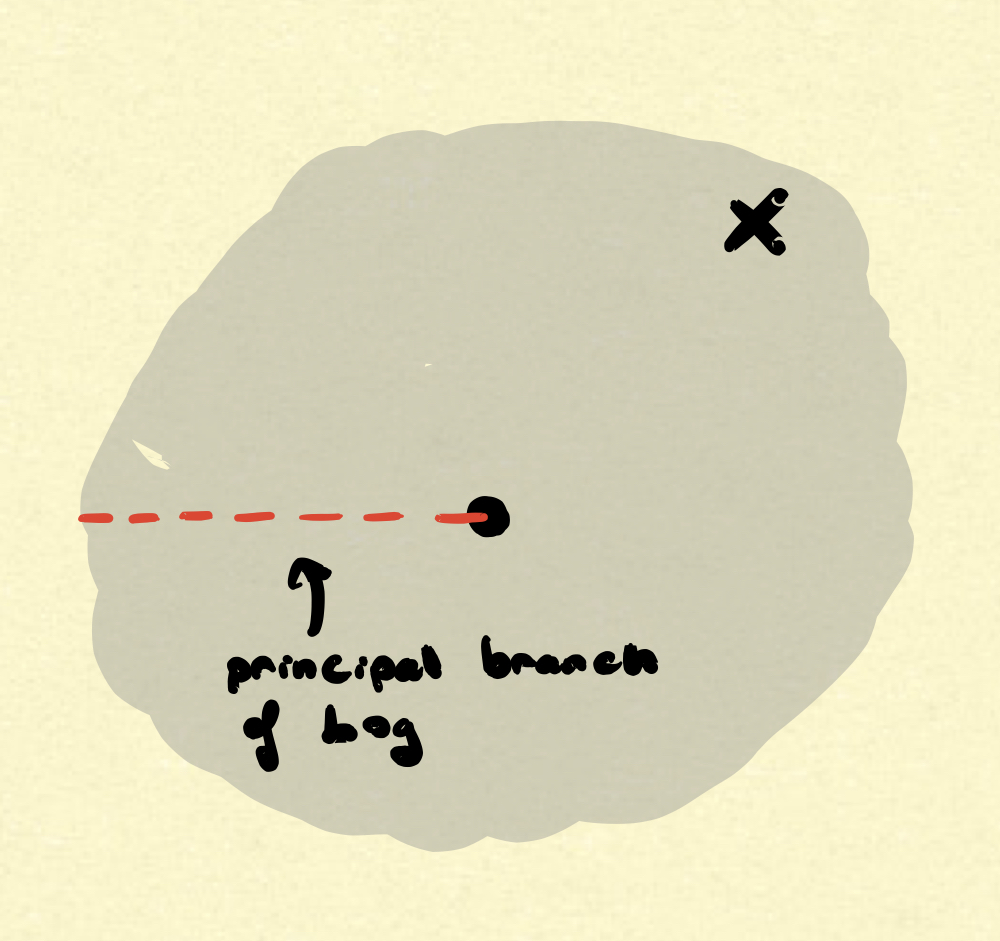 By cutting up the domain of log, we can make it single-valued

This is an example of a multi-valued function on

, and doesn’t lie in

, and naturally form a ring (after fixing a universal cover of

). We don’t need this entire ring quite yet (it contains other weird things like functions with essential singularities and Whitney functions), but we’ll come back to it.

(we can even fudge a bit to allow

) are said to have a regular singularity at 0. This is a bad choice of terminology, since sometimes “regular” means “non-singular” in algebraic geometry, so perhaps “tame” would’ve been a better name since they are classified by the rank of the connection and the monodromy matrix. These are the mildest sorts of singularities that appear in the theory of meromorphic connections, and are the the subject of the classical Riemann-Hilbert correspondence (in D-module language) of Kashiwara and Mebkhout. The solutions to these sorts of differential equation are very similar to our example of

, we can find by the Frobenius method

linearly independent solutions of the form

is a holomorphic function on

(the expression is slightly more complicated if an exponent

is repeated, or if some pair

differ by an integer). These functions may be only well-defined single-valued functions on certain arc neighborhoods of 0, i.e., open sets of the form 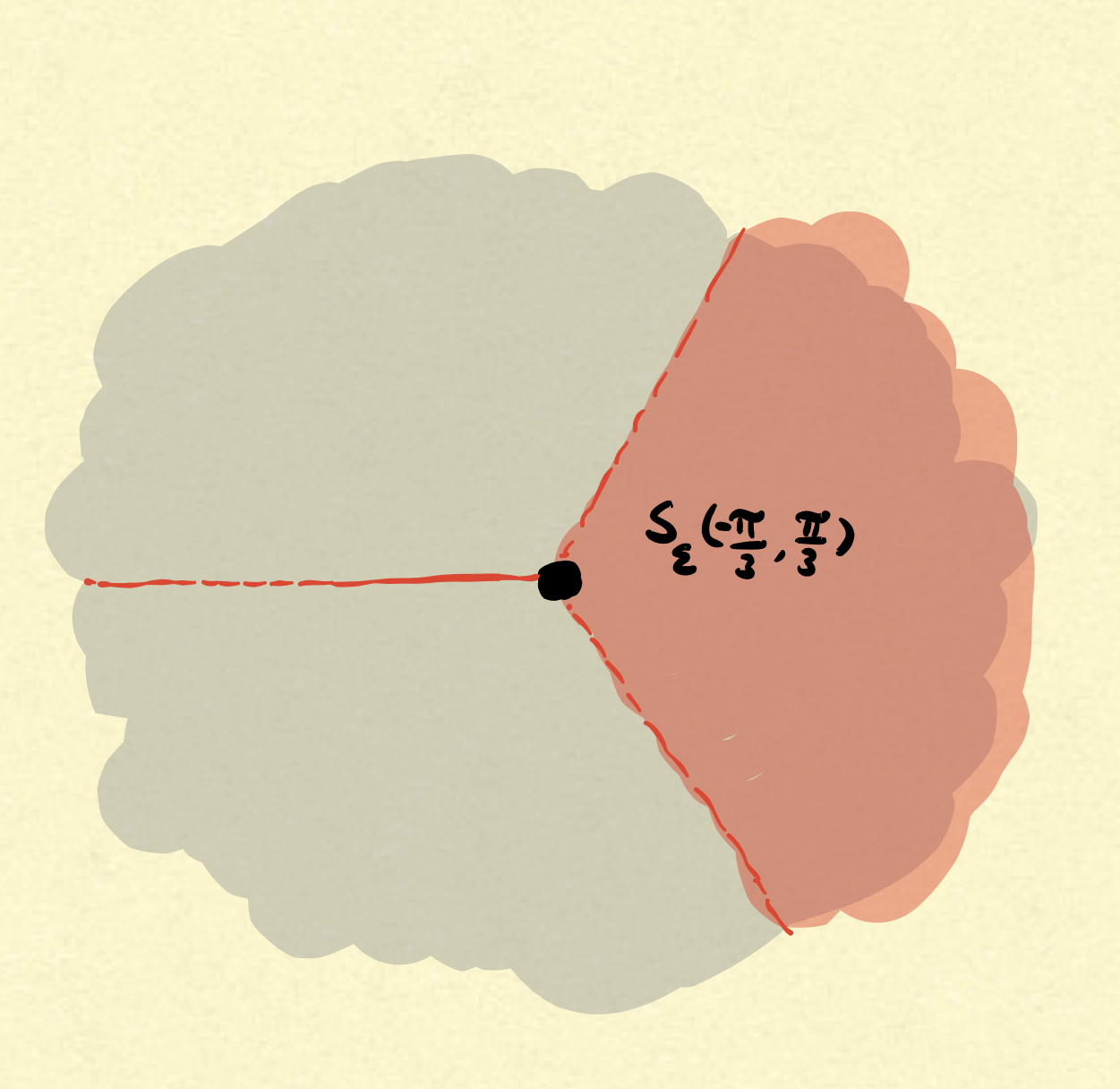 arc neighborhoods on which

Solutions to ODE’s with regular singularities on

, even multi-valued ones, always behave “like” meromorphic functions in an appropriate arc neighborhood of any particular angle

. When we say “behaves like a meromorphic function”, we mean that as we approach 0 from inside that arc neighborhood, the norm of the solution

grows only polynomially in

, as if it were a Laurent series with only finitely many terms of negative degree.

, in the sense that there are

on the arc neighborhood

, the values of the constants

may change. We just say

For single-valued functions on

, moderate growth at 0 is equivalent to being meromorphic along 0.

This analytic characterization is actually a necessary and sufficient condition; a meromorphic connection

has a regular singularity at 0 if and only if all of its flat sections have moderate growth at 0. Algebraically, this can be characterized by Fuch’s Criterion, but we will not focus on this perspective.

Aside from this interesting growth condition, or the simplicity of their solutions, why do we care about regular singularities? Let

be the category of Meromorphic Connections with regular singularities at 0, and

the category of flat connections on

induces an equivalence of categories

To show that we can always extend a given

to an element of

is uniquely determined by a monodromy representation

defined by the local system

correspond to the element 1 in the identification

is determined by the matrix

. We can then always find a matrix

, which we then use to define a connection matrix on

is the standard basis for

clearly has a regular singularity at 0 and restricts to

Essentially, the singularities of connections with regular singularities are so mild that they are completely determined by their monodromy around the singular point. Recalling the previous post, we obtain the following:

Corollary (Deligne): There is an equivalence of categories

is the category of finite-rank

We say a meromorphic connection

do not have moderate growth at 0. What does this mean? First off, the absence of regularity doesn’t necessarily mean

doesn’t satisfy (1) everywhere, just that there are some

which have no arc neighborhood on which

has polynomial growth in

has moderate growth at every

decays to 0 exponentially as

does not have moderate growth on

Aside from no longer having moderate growth, one of the other reasons Deligne’s theorem no longer holds in the irregular setting is that we can’t uniquely specify a general meromorphic connection on

by its restriction to

. We actually saw this in the last post–the Meromorphic Connections

are all non-isomorphic (for

), but their local systems of flat sections are all isomorphic to the constant local system

. In essence, there are too many local systems with the same monodromy, if we have no restrictions on the singularities.

So, why do we care about these ODEs if they’re so difficult to deal with? Many interesting special functions arising in engineering and physics arise as solutions to ODEs with irregular singularities. Take, for example, the Airy equation

which has an irregular singularity at

, and its fundamental solutions

are approximated (in a rigorous sense, using asymptotic analysis) by linear combinations of the functions

for large values of

. Now, here is the interesting thing: a solution

of the Airy equation is an entire function of

, since the coefficient function (which is just

) is entire, but the functions

are multi-valued functions. Hence, as we let

will return to its original value, but

cannot be represented by the same linear combination of

This is known as the Stokes Phenomenon, where solutions to linear ODE’s can undergo drastic qualitative changes as

passes through certain angles. Specifically, these qualitative changes happen to the asymptotic behavior of the solutions in the different regions bounded by these special angles (sometimes called Stokes angles, or Stokes lines (or anti-Stokes lines, if you’re a physicist)). This is a phenomenon unique to the world of irregular singularities. We go through all of this extra work because sometimes it can be exceedingly difficult to express exact solutions in terms of elementary functions (or even special functions!), and the approximations in terms of exponential factors can often tell us much more about the “physical” properties the true solutions that are difficult to see from their formulas. We recommend Meyer’s “A Simple Explanation of the Stokes Phenomenon” for this perspective.

In the next post, I’ll talk some more about the formalism of approximation and asymptotic analysis, and how it naturally leads to a way of characterizing solutions of with irregular singularities via the Stokes filtration.