I mentioned last post that one should think of the microsupport of a complex of sheaves in terms of some loose idea of “propagation.”  I want to talk about that a little more now.  The gist I want you to walk away with is “the microsupport characterizes (co)directions of non-propagation.”  Whatever that means. 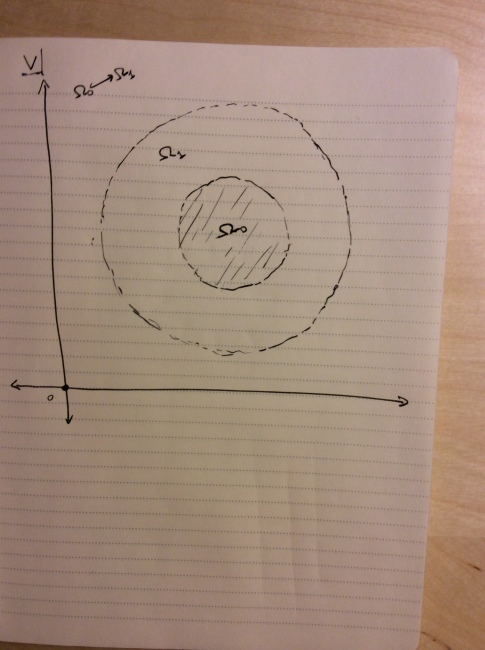 be a local system on V (i.e., a locally constant sheaf of real vector spaces, considered as a complex  concentrated in degree zero).  It’s well known that the inclusion of open subsets

induces an isomorphism in (hyper)cohomology:

So, instead of just say “they have isomorphic cohomology,” you should be thinking “every section of

can be extended to all of 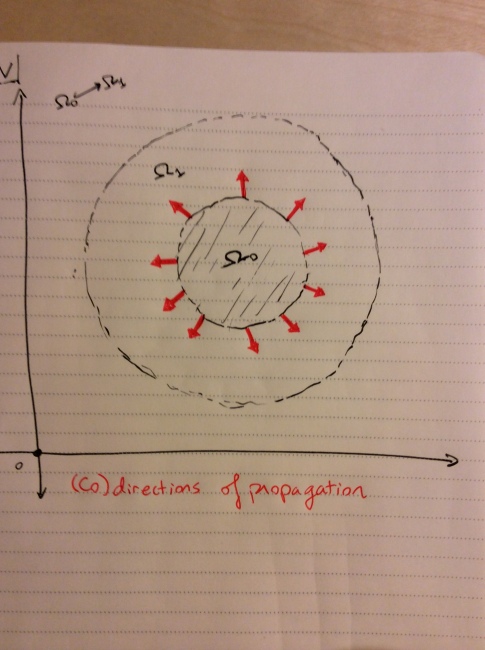 The idea of localizing a sheaf

(say for the moment,

is some open subset) is one of the most basic tools in an algebraic geometer’s tool box.  You forget everything else about how

, and just focus on its behavior very close to

.  That is, you’re examining its local behavior at

.  If we want to understand how the cohomology of

, we need to examine the microlocal behavior of

, in the space of directions from

(really, however, we want ‘codirections’ associated to covectors based at

, the cotangent space of

if necessary, we can then assume that

is the differential of some smooth function

, and by translation, we can further assume that

.  Although lots of functions might have differential equal to

, for simplicity, we can just assume that

is some globally defined

-linear form.  Since, locally, we can safely just picture covectors as ordinary vectors based at

as the “normal vector” to the hyperplane

.  Which makes sense, of course, since we can think of the differential

here as “the gradient vector

“, which is always normal to level sets of

. In the general case, you can still make this association, but you’ll need some added structure on your space (e.g., a Riemannian metric). 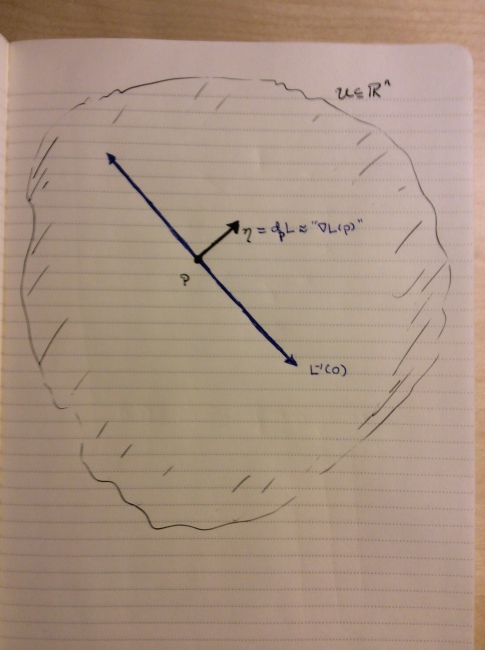 to investigate possible changes in the cohomology of

as we move away from

.  How would we go about doing that?

Think about it.  First, let’s work inside some small open ball

.  If every section of

can be extended passed the “boundary”

, at least a little bit (say to

), then the cohomology of

over W should be isomorphic to the cohomology over

, and this isomorphism should be induced by restriction. 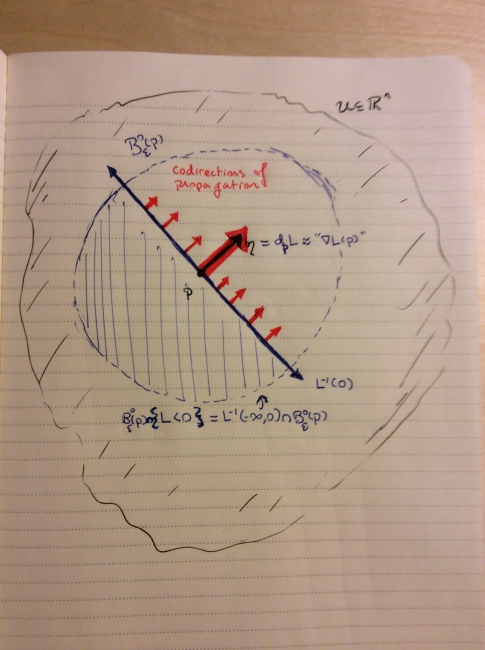 So, in fancy language, we’d say the relative cohomology complex of

is zero.  Of course, it might happen to be the case that some sections can only propagate across

on small neighborhoods of

, so in order to pick up all such sections, we look at the limit

.  A little bit of abstract nonsense then reveals this object is none other than

, the local Morse data of

Recalling my last post, this sort of vanishing tells us that the pair

is not in the microsupport of

! Before, I denoted this by

, but from now on, I think I’ll stick with the more popular notation:

(“SS” stands for “singular support,” in case you were wondering).

In order to explore further properties of the microsupport of a complex of sheaves, we’ll need a little more machinery at our disposable.  In particular, something called the “

inside a vector space, and the “non-characteristic deformation lemma,” a technical result at the core of the majority of the ensuing propagation theorems.  At the risk of ranting even more, I’ll stop here.  I know I haven’t done much new stuff in this post, but I hope I’ve helped elucidate the basic ideas/motivations behind microsupports.

I'm a third-year math postdoc at the University of Wisconsin-Madison, where I work as a member of the geometry and topology research group. Generally speaking, I think math is pretty neat; and, if you give me the chance, I'll talk your ear off. Especially the more abstract stuff. It's really hard to communicate that love with the general population, but I'm going to do my best to show you a world of pure imagination. View all posts by brianhepler