As the title says, I want to show that for any topological space

, the category of set-valued presheaves PSh(X) on

has all finite limits and co-limits.

First, PSh(X) has both initial and terminal objects.  With a bit of thought, these are (obviously) the constant functors 0  and 1 (resp.) where, for all open subsets

and the morphisms for 0 and 1 are just the identities.

Second, we need to show that PSh(X) has a pullback for every diagram

and a pushout for every diagram

be a diagram of presheaves.  I claim that the presheaf defined via

open.  Basically, we just define the pullback “element-wise” on the source category.  The morphisms are a bit tricky though.  Indeed, given a map

of open sets, how do we define the “restriction” map

?  One should never diagram chase in public, but let me assure you that it really ends up just being the map guaranteed by the universal property of the pullback. 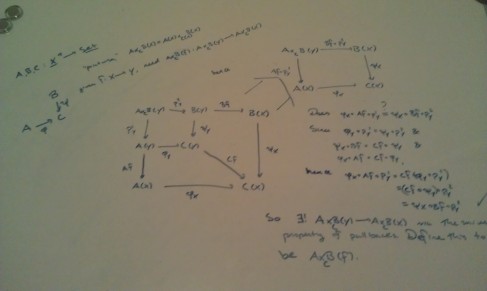 (picture for clarity).  It’s a bit clumsy, but one gets a pushout in the same manner, defining it element-wise as a the quotient

iff there exists a

.  This sometimes denoted as

Since PSh(X) has a terminal object and pullbacks, it has a finite limits.  On the other hand, it has an initial object and pushouts, so it has all finite co-limits.  Easy.

It turns out that the category of sheaves on

, Sh(X) is finitely bi-complete as well, but showing it for PSh(X) is really easy so I decided to just do that one.
Next time, I want to look at the following case:  If there is pair of adjoint functors

?  I’ve only looked at the case where the adjunction is the forgetful functor and free abelian group functor and the case of presheaves, where this statement does in fact hold.  Until next time.  🙂

For anyone who has done a bit of work in modern geometry (primarily the notion of a (smooth) manifold), we want objects to be “locally” trivial, or easy to study.  The global structure might be this crazy awesome geometric shape, but locally it’s going to look like boring old

depends on what you want to study.  For example, a smooth manifold

is a set together with an atlas of “smooth” charts, such that for any point

, there is an open neighborhood

that is diffeomorphic to an open subset of

The idea is that although the global structure of some object might be hard to study, local behavior should be easy.  Think of looking at say… a torus (doughnut).  For any point on the torus, if you look close enough, it looks pretty much flat.  Even though the global shape is decidedly not flat.

.  We don’t really have to define

everywhere, we just have to know that

behaves smoothly with respect to the atlas of

, there is a neighborhood

is a smooth, real-valued function.

Most people don’t go this deep down the rabbit hole, but there is a unifying principle behind extending local data to global data.  This is given by the notion of a “sheaf.”  Most of the time, people first encounter these things in an algebraic geometry or algebraic topology class, in the context of “cohomology with local coefficients” which are usually abelian groups or something similar.

First, presheaves (of abelian groups) on a topological space

constists of the data of:

A sheaf is all this, subject to a nice “gluing” condition.  That is:

Note here that the former condition implies that the section

in the latter condition is unique.

That was a bit of a mouthful.  So complicated a definition.  I don’t really like this way of defining it, but it’s okay.

be a topological space, and make the category X whose objects are the open sets of

and morphisms are those induced by the obvious poset structure.  Then a presheaf

of abelian groups is just a functor

is a sheaf if, for every open set

is an equalizer diagram.

So now we have sheaves.  What are the maps?  Well, the sheaves are just functors, so the obvious choice is that they’re natural transformations of functors.  Hence, we have a category of sheaves!  Denote this by

if the sheaves have values in a category C.

Why should I care?

tends to retain a lot of the structure of the category C.  The most encountered example is that

is an abelian category whenever C is (I’ll revisit these neat abelian categories in a later post.  They basically “behave like abelian groups” enough for us to do homological algebra.).   The example I want to pursue is that

is a topos whenever C is (I’ll DEFINITELY do a post on these things later).

I’m still learning this stuff, and I’m continually amazed at how pervasive the idea is.  Turns out that you can also define sheaves on a category by giving a the category a certain “topology” called a “Grothendieck topology.”

Wherever there is the study of local vs. global behavior, there is sheaf theory.  Even in physics now, where one studies the structure of “quantum events” via covers of boolean reference frames, or where “locality and contextuality” is the cohomology of sheaves.  So. Fucking. Cool.

So last post I gave a (hurried) description of why adjoint pairs of functors are linked to this notion of “similar structure” between two categories.  In this post, I want to relate adjunctions to universal properties, and ultimately why we like adjoint pairs so much.

Say we’re working with the “free group on a set” functor,

.  We know that the free group satisfies a really nice universal property: Given any (set) function

is a group, there exists a unique group homomorphism

.   If you recall the notion of the “forgetful” functor

that takes a group and gives its underlying set, the universal property of the free group on

states that there is a bijection

is an adjoint pair (of course, one should check the naturality of this bijection).  Hence the universal property here is really just this adjunction in hiding.  This idea is generalized often by saying that a category C has “free objects” if a suitably defined forgetful functor from C possesses a left adjoint.

as a sort of “globally defined” universal property, as expressed by the naturality of the bijection between hom-sets.  Indeed, we have that a functor

has a left adjoint provided that we can find, for each object

” of D and a morphism

that is universal among morphisms form

to the image of

, there is a unique

.  I use the quotations here only to emphasize the fact that we really want the object “

” to be “the component of some suitable functor

I don’t know about you, but this sound a lot like: “For any functor

has an initial object.” (Remember, a functor

simply selects an element of C.)  That is, this sounds A LOT like how we initially (haha, pun) constructed universal properties from comma categories.  The statement of the above paragraph then says that if we can find such an initial object for any choice of functor

As mathematicians are wont to do, whenever we have a collection of algebraic “objects,” we want to know how to “relate” them.  In the case of categories, we saw earlier that maps called functors are what we want to examine.

.  Saying that two categories are isomorphic means that they are, for all intents and purposes, the same (maybe they differ in notation or something).

As it happens, this tends to be too restrictive a condition (i.e. categories that behave more or less the same tend to not actually be isomorphic).  What if, instead of requiring that

, we require that these functors are naturally isomorphic to the appropriate identities?  We would then say that C and D  are “equivalent” categories.

The first time I ever saw this phenomenon was in algebraic geometry, where one sees that the category of finitely generated reduced

-algebras is equivalent to the category of (affine) algebraic varieties over

is equivalent to the category of

For a simpler example, take any poset

and consider it as a category.  Then reversing the direction of the arrows gives an equivalent category

Obviously, this works for any category and its opposite category.  I just like the poset case because one can visualize it quite easily.

Simply put: adjunctions are ubiquitous.  It took me a long time to see that, and I’m still wading through the ramifications.  I gave a (brief) blurb about them in the last post, but let’s up the scrutiny.  We say

are an adjoint pair (written

) if there is a natural bijection between maps

Note that, in D, we have the map

.  The adjunction gives a unique map

, and likewise we have a unique map

.  These maps are called the “unit” and “counit” of the adjuction at

.  In fact, the adjunction yields a pair of natural transformations

actually implies the “bijection” criterion, so we can really just take the unit-counit thing as a starting point.

I’m not going to reiterate the definitions of limits and co-limits from the last post, so just look them up if you’re new here.  They’re not too hard.

This post is mainly just about some random cool things I’ve noticed/ “remembered” / come across whilst playing with the notions of limit and co-limit in various categories.

Say we’re working in R-Mod for some ring

-modules.  Taking the limit of the “discrete” diagram

gives us the “product diagram: ”

.  We can then take the co-limit of this diagram, which is the quotient

is the module generated by elements of the form

.  It then follows that the pushout is trivial.  Strange.

EDIT:  for some clarification, I want to show that for any diagram of the form

, then the colimit is the object

is the submodule generated by the elements

.   Clearly, it does fit into the appropriate diagram.   Now let

be any other module with maps

.  Then, via the universal property of the direct sum, there is a unique map

are the canonical inclusions).  Then we have that

.  Via the universal property of the quotient, there is a unique homomorphism

that makes the whole diagram commute.

In the case where

, so that the quotient

The dual construction is (obviously) similar, where we first take the co-limit of the discrete diagram, then the limit of the “co-product diagram.”  It is also the zero module.

Adjunction spaces in Top, the category of topological spaces.  Let

(represented as a monic

be a continuous function.  Then the adjunction space obtained by gluing

is just the co-limit of the diagram

be a topological space, which has a natural poset structure on its collection of open sets.  Formally, we turn

into a category X whose objects are the open sets of

and the morphisms are determined via

be elements of X such that

.  Then the limit of the diagram

is just the intersection

Limits as functors.  Turns out you can replace the notion of a “diagram in C” (where C is the category we’re looking at) with a functor

, where I is a small category.  Think about it!  The limit of such a diagram is denoted by

Say we have two functors

form an adjoint pair if, for all

, we have a bijection

that is natural in

is left adjoint to

is right adjoint to

be an adjoint pair of functors, and let

be a diagram.  The statement is then that

as a limiting cone, apply

.  Then, use adjunction to get a map

in I. The universal property of

gives us a map

by applying adjunction again.  These maps are quickly seen to be inverses of each other (keep looking through universal properties and such).  A good outline of this proof can be found in Paolo Aluffi’s “Algebra: Chapter 0”

Similarly, we have that Left adjoints commute with co-limits.